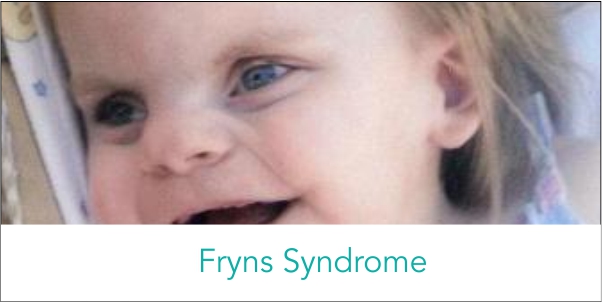 Fryns syndrome is a condition that affects the development of many parts of the body. The features of this disorder vary widely among affected individuals and overlap with the signs and symptoms of several other disorders. These factors can make Fryns syndrome difficult to diagnose.

Most people with Fryns syndrome have a defect in the muscle that separates the abdomen from the chest cavity (the diaphragm). The most common defect is a congenital diaphragmatic hernia, which is a hole in the diaphragm that develops before birth. This hole allows the stomach and intestines to move into the chest and crowd the heart and lungs. As a result, the lungs often do not develop properly (pulmonary hypoplasia), which can cause life-threatening breathing difficulties in affected infants.

Other major signs of Fryns syndrome include abnormalities of the fingers and toes and distinctive facial features. The tips of the fingers and toes tend to be underdeveloped, resulting in a short and stubby appearance with small or absent nails. Most affected individuals have several unusual facial features, including widely spaced eyes (hypertelorism), a broad and flat nasal bridge, a thick nasal tip, a wide space between the nose and upper lip (a long philtrum), a large mouth (macrostomia), and a small chin (micrognathia). Many also have low-set and abnormally shaped ears.

Several additional features have been reported in people with Fryns syndrome. These include small eyes (microphthalmia), clouding of the clear outer covering of the eye (the cornea), and an opening in the roof of the mouth (cleft palate) with or without a split in the lip (cleft lip). Fryns syndrome can also affect the development of the brain, cardiovascular system, gastrointestinal system, kidneys, and genitalia.

Most people with Fryns syndrome die before birth or in early infancy from pulmonary hypoplasia caused by a congenital diaphragmatic hernia. However, a few affected individuals have lived into childhood. Many of these children have had severe developmental delay and intellectual disability.