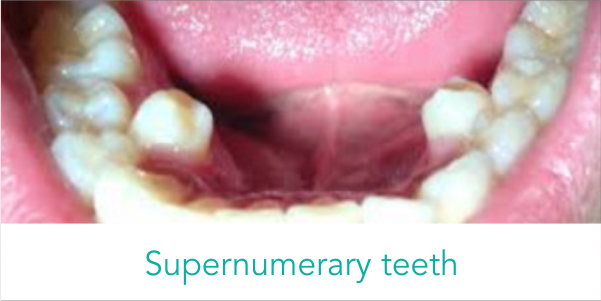 Supernumerary teeth can be classified by shape and by position. The shapes include the following:

When classified by position, a supernumerary tooth may be referred to as a mesiodens, a paramolar, or a distomolar.

The most common supernumerary tooth is a mesiodens, which is a malformed, peg-like tooth that occurs between the maxillary central incisors.

Fourth and fifth molars that form behind the third molars are another kind of supernumerary teeth.

There is evidence of hereditary factors along with some evidence of environmental factors leading to this condition. While a single excess tooth is relatively common, multiple hyperdontia is rare in people with no other associated diseases or syndromes. Many supernumerary teeth never erupt, but they may delay eruption of nearby teeth or cause other dental or orthodontic problems. Molar-type extra teeth are the rarest form. Dental X-rays are often used to diagnose hyperdontia.

A similar condition is hypodontia, in which there are fewer than the usual number of teeth.

Hyperdontia is seen in a number of disorders, including Gardner’s syndrome and cleidocranial dysostosis, where multiple supernumerary teeth are seen that are usually impacted.