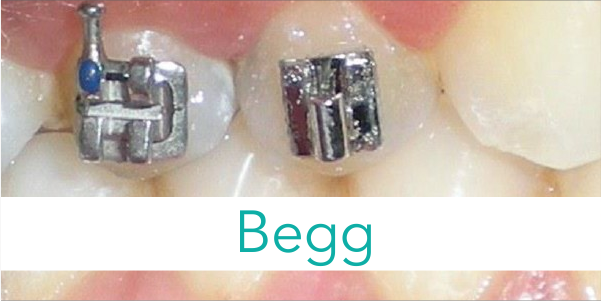 The Begg light-wire appliance remains unique in the history of orthodontic innovation.  Whereas many current self-ligating bracket appliances purport to be low friction or friction free, it is the Begg appliance that best exemplifies low friction, free sliding mechanics.

Begg’s bracket design allowed teeth to freely tip mesially and distally as well as lingually and labially.  This often gave teeth the appearance of being over tipped during treatment and required considerable diligence by Begg practitioners to keep tooth movement under control.

This freedom of tooth movement allowed unprecedented correction of large overbites and overjets to an edge-to-edge position and rapid closure of extraction spaces by initially tipping the adjacent teeth into the extraction site and uprighting the teeth afterwards.

Individual tooth root correction was managed by the use of fine springs that were designed, and often individually crafted to upright, torque and rotate teeth into their correct positions once the position of tooth crowns had been established.

One key advantage of the appliance set up was the use of light elastic forces for the correction of anterior overbites and overjets. All anchorage could be established intra-orally without headgear, without the need for ancillary appliances such as trans-palatal arches, or needing to set up molar anchorage prior to treatment, as Dr Tweed advocated.

Of equal importance was that with judicious use of light elastic forces and the astute placement of tooth moving auxiliaries, such as torqueing auxiliaries and uprighting springs, differential anchorage could be created.  This enabled greater control of tooth movement of individual teeth or groups of teeth so they could be moved predictably to a greater or lesser extent to meet treatment requirements.

Although the free tipping design of the Begg bracket facilitated rapid tooth movement and enabled extraction spaces to be closed easily, its one-point contact meant that teeth were free to tip passed there corrected positions. There were no parts of the bracket to stop tooth movement or hold corrected teeth in their corrected positions. Therefore, in order to satisfactorily complete treatment all tooth corrections had to be completed more or less simultaneously.

Although the Begg appliance was used frequently during the 1960’s through to the 1990’s, the appliance is now used less frequently.  One of the reasons for this is the same reason it was difficult to promote in the early days.  Few practitioners are confident enough in its use to train other colleagues.  Often orthodontists familiar with free tipping mechanics have incorporated the TipEdge or TipEdge Plus appliance into their clinical practice.