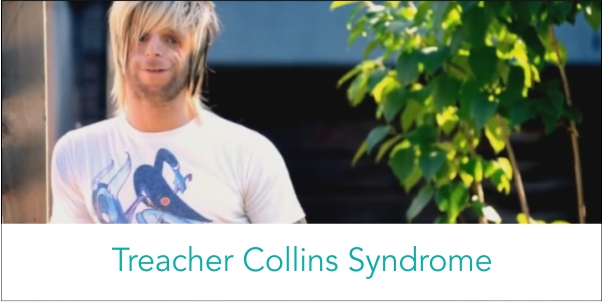 Treacher Collins syndrome or Mandibulofacial dysostosis is a condition that affects the development of bones and other tissues of the face. The signs and symptoms of this disorder vary greatly, ranging from almost unnoticeable to severe. Most affected individuals have underdeveloped facial bones, particularly the cheek bones, and a very small jaw and chin (micrognathia). Some people with this condition are also born with an opening in the roof of the mouth called a cleft palate. In severe cases, underdevelopment of the facial bones may restrict an affected infant’s airway, causing potentially life-threatening respiratory problems.

People with Treacher Collins syndrome often have eyes that slant downward, sparse eyelashes, and a notch in the lower eyelids called an eyelid coloboma. Some affected individuals have additional eye abnormalities that can lead to vision loss. This condition is also characterized by absent, small, or unusually formed ears. Hearing loss occurs in about half of all affected individuals; hearing loss is caused by defects of the three small bones in the middle ear, which transmit sound, or by underdevelopment of the ear canal. People with Treacher Collins syndrome usually have normal intelligence.

Treacher-Collins syndrome is caused by a defective protein called treacle. The condition is passed down through families (inherited)

This condition may vary in severity from generation to generation and from person to person.

The child usually will show normal intelligence. Examination of the infant may reveal a variety of problems, including:

Hearing loss is treated to ensure better performance in school.

A good plastic surgeon is very important, because children with this condition sometimes need a series of operations to correct birth defects. Plastic surgery can correct the receding chin and other changes in face structure.