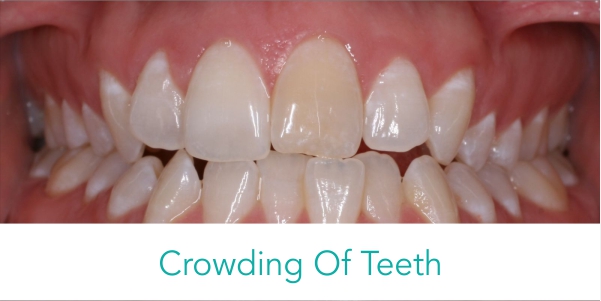 Crowding of teeth is where there is insufficient room for the normal complement of adult teeth.

Extra teeth, lost teeth, impacted teeth, or abnormally shaped teeth have been cited as causes of malocclusion. A small underdeveloped jaw, caused by lack of masticatory stress during childhood, can cause tooth overcrowding. Ill-fitting dental fillings, crowns, appliances, retainers, or braces as well as misalignment of jaw fractures after a severe injury are other causes.

Tumors of the mouth and jaw, thumb sucking, tongue thrusting, pacifier use beyond age 3, and prolonged use of a bottle have also been identified as causes.

In an experiment on two groups of rock hyraxes fed hardened or softened versions of the same foods, the animals fed softer food had significantly narrower and shorter faces and thinner and shorter mandibles than animals fed hard food. Experiments have shown similar results in other animals, including primates, supporting the theory that masticatory stress during childhood affects jaw development.

Only one small study has investigated this effect in humans. Children chewed a hard resinous gum for two hours a day and showed increased facial growth.

A 2011 paper suggested that “the changes in human skulls are more likely driven by the decreasing bite forces required to chew the processed foods eaten once humans switched to growing different types of cereals, milking and herding animals about 10,000 years ago.”

Crowding of the teeth is treated with orthodontics, often with tooth extraction, Invisalign, or dental braces, followed by growth modification in children or jaw surgery (orthognathic surgery) in adults. Surgery may be required on rare occasions.

This may include surgical reshaping to lengthen or shorten the jaw. Wires, plates, or screws may be used to secure the jaw bone, in a manner similar to the surgical stabilization of jaw fractures.

Very few people have “perfect” alignment of their teeth. However, most problems are very minor and do not require treatment.

Inter-arch Tooth Size Discrepancy (TSD) is defined as a disproportion in the mesio-distal dimensions of teeth of opposing dental arches, which can be seen in 17% to 30% of orthodontic patients.