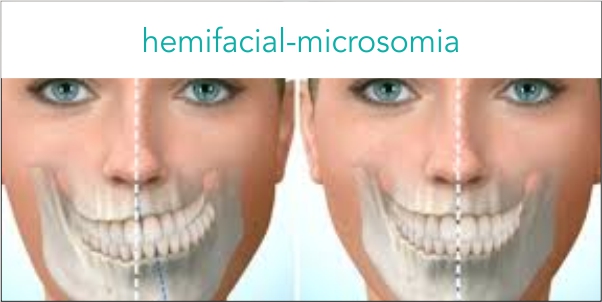 What is hemifacial microsomia?

Those with HFM may also have abnormalities in other parts of the body. HFM is the most common facial birth defect after clefts.

What are the symptoms of hemifacial microsomia?

The primary symptom of hemifacial microsomia is an abnormal appearance. Some deformities are easily noticeable and others are less noticeable. The most common deformities include:

Other complications from HFM include spinal malformation, abnormal kidneys, and heart defects. Some children also have limited muscle movements, difficulty opening the mouth, or poor alignment of the teeth. Nerve problems or hearing difficulties are also common.

This study investigates the increased risk of social and emotional difficulties for people with HFM. It shows that, compared to their peers, they are:

What are the risk factors of hemifacial microsomia?

HFM occurs in somewhere between 1 in 5,600 and 1 in 26,550 newborns, according to the NIH. This range may be an underestimation because doctors don’t agree on the criteria for diagnosis, and because mild cases may go undiagnosed.

The disorder occurs about 50 percent more often in males than females.

A developing embryo has six pairs of pharyngeal arches, which develop into the muscles, arteries, nerves, and cartilage of the face and neck. The first and second arches, called the branchial and visceral arches, develop into the lower jaw, nerves and muscles used for chewing and facial expression, and parts of the ear. Hemifacial microsomia occurs when these first and second pharyngeal arches don’t develop properly. Why this occurs is unknown.

Research attempts to study a potential genetic cause of HFM. It looks for a duplication or deletion of genetic material in people with HFM. There are some instances of multiple family members with the disorder. According to the NIH, in most cases only one person in a family has the condition. More research needs to be done on the cause of the disorder.

How is hemifacial microsomia diagnosed?

To diagnose hemifacial microsomia, your child’s doctor will review their medical history and perform a physical exam. During the exam the doctor will look closely at their:

To get a better look at the structure of your child’s face and head, a doctor may consult a geneticist or order tests, such as:

To see if other parts of your child’s body are affected by the condition, your doctor may order other tests, such as:

Heart deformities are rare in children with HFM. Kidney issues and cervical spine issues both occur in about 10 to 15 percent of children with HFM, according to the Seattle Children’s Hospital.

How is hemifacial microsomia treated?

Treatment for hemifacial microsomia will depend on the severity of the condition and whether the child suffers from other ailments as a result of the condition. Reconstructive surgery may be performed, but it might be postponed until the child is older and more fully formed. Surgery may not be necessary but chosen for cosmetic reasons.

The following are some examples of treatments that address abnormalities in different areas:

What is the outlook for hemifacial microsomia?

Hemifacial microsomia may cause physical complications. Some children with difficulty eating or breathing must be monitored closely. Others may have minor troubles throughout life with speaking, hearing, or facial movement, especially if they don’t seek treatment.

Despite physical and emotional issues associated with the condition, most people with HFM go on to live healthy and fulfilling lives, regardless of the severity of their condition and whether or not they need surgery or treatment.