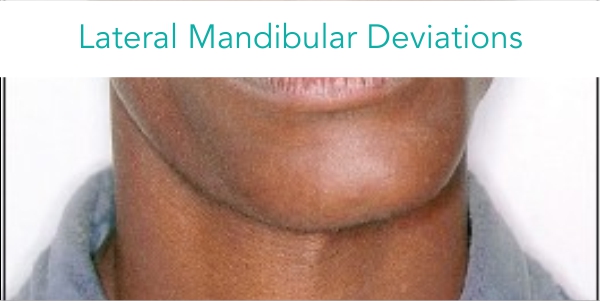 The mandibular laterodeviation is one of the most evident malformations of the face, because it alters the lower third of the face. Etiologically it can be classified into: Static laterodeviations caused by teeth; Static laterodeviations caused by skeleton change: by monolateral hypertrophy (condyle, condyle and neck of the condyle, half mandible hypertrophy); by monolateral hypertrophy (congenital pathological); Dinamic laterodeviations functional. The midline displacement with posterior monolateral cross bite is caused by width discrepancy between the upper and lower dental arch resulting in a lateral shifting of the mandible. This laterodeviation is also called “laterale forced bite” or “articular cross bite”. Articular cross bite is generally corrected by orthodontics during the interceptive period when the growth of the jaws is still present. In the author’s opinion the orthognathic surgery is absolutely necessary for adult dental laterodeviation already stabilized. The skeletal laterodeviation must always be treated by orthognathic surgery. It is the author’s practice to use the sagittal bilateral osteotomy at the angle and ramus level whose lines of osteotomy at the angle are different from one another depending on the displacement and rotation which one must do to the mandible to get contact surfaces which are larger enough to ensure proper union because the two mandibular halves have different lengths and different angles. This kind of operation normalizes the occlusion and is sometime sufficient to harmonize the oval of the lower third of the face. In the anterior part of the chin is still laterodeviated one continues with a wedge shaped osteotomy at the tip of the chin in order to reposition the tip to the midline and with an additional osteotomy at the hypertrophied angle level. If laterodeviation is joined by other bone malformations in can be considered a symptom which is more or less marked. In this case, therefore, laterodeviation is a part of a complex malformatin of the jaws: mandibular prognathism and/or maxillary retrognathism and/or maxillary prognathism. Consequently the operation must be single or combined. In these cases, one uses combined operations on the lower and upper jaws, so as to correct the various jaw malformations at the same time. The surgical methods used to correct laterodeviations of pathological origin are only directed to harmonize the edge of the mandible because only people with occlusion within the norm were seen by the author. The surgical methods are different depending on the complexity of the malformation. At the end laterodeviation on a functional basis are treated by the operation established by Köle which consists of a dermofibrotic flap, cut in front of the tragus, and then passed in front of the condyle in the space of the sigmoidal incisure and fixed to the mucous membrane of the internal wall of the cheek. Many well recorded cases have been presented.